The Baltimore Ravens have tied a bow on their 2019 Draft.

With the draft concluded, here are some takeaways as the Ravens move on in the off-season process.

Holy Speed Batman! Ravens General Manager Eric DeCosta made a statement in Round 1 drafting Brown out of Oklahoma.

Brown was the fastest wideout in this draft class. He gives the Ravens an immediate deep play threat to pair with Lamar Jackson, who in case you have forgotten is quite fast in his own right. Brown tallied 75 catches for 1,318 yards and 10 touchdowns for the Sooners last season.

Per NFL Analyst Lance Zierlein: “His ability to threaten deep with long speed and short as an elite run-after-catch talent gives him a chance to become the most impactful wideout in this draft.” Additionally the NFL comparison listed for Hollywood Brown in his draft profile is DeSean Jackson.

Brown wasn’t the only speedster added to this team as DeCosta also picked up Notre Dame’s Boykin in the third round. Boykin ran a 4.42 40-yard dash at the NFL combine and has ideal NFL size at 6’4 220. Boykin hauled in 59 passes last season for the Irish as well as eight touchdowns.

DeCosta then added Hill at running back in the fourth round out of Oklahoma State. He picked up 930 yards and nine touchdowns last season with the Cowboys before turning in 4.4 40-yard dash at the NFL combine.

The pieces are there for the Ravens to be exciting on offense. When was the last time you could say that?

Time will tell if they are correct in their assessment.

By waiting until their second selection in round four to select Powers 123rd overall out of Oklahoma, the Ravens sent the message that they are relatively content in their in-house options at offensive line. The interior offensive line was assessed as an area of need by many, myself included, prior to the draft. Turns out that Powers was the only linemen selected by the Ravens.

Powers was a three-year starter for the Sooners and appears to be a mauler but most don’t expect him to be an NFL starter from day one. Zierlein adds “He could be a backup guard with a chance to work his way up the ladder for a team who values force over finesse.” The Ravens intend to be a power running team, but it remains unknown whether Powers would be able to work himself up to speed to gain starter reps this season. 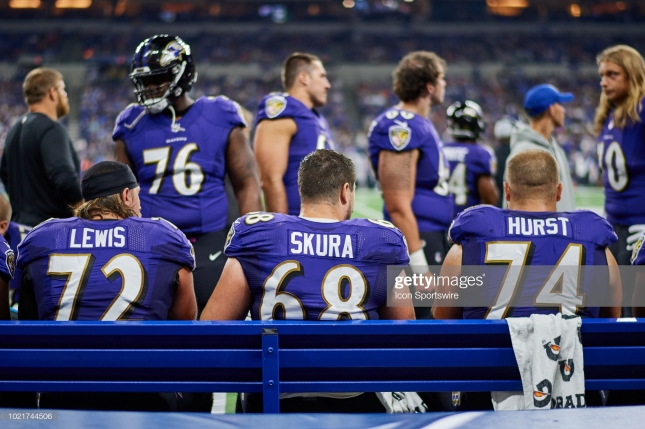 That means the possibility of a starting offensive line group that includes two of the Matt Skura, Alex Lewis, and James Hurst trio. Skura moved over to center last season as the Ravens jettisoned Ryan Jensen. He was seen as a point of weakness by many in 2018, but the Ravens not selecting a center leads me to believe that Skura will get the starting nod next year.

As far as who plays at left guard for the Ravens, it could come down to Lewis or Hurst. Lewis has proven nothing outside of his ability to miss games and Hurst has been the butt of many jokes over the years, failing to make too much of an impact over his tenure in Baltimore.

It is certainly possible that the Ravens look to add linemen prior to the start of next year. If not however, DeCosta better get this one right as the best way to derail a potential high-flying offense would be an offensive line that cannot hold up.

The Ravens appear content heading into 2019 with Patrick Onwuasor and Kenny Young starting at inside linebacker. Image Credit: Baltimore Sun

The Ravens responded to this void by selecting no inside linebackers in the 2019 Draft. They made a resounding statement that if need be, they will be ready to open the season with Onwuasor and Young covering the inside linebacker position.

Onwuasor has been vocal this off-season on multiple occasions in saying that he is confident of the rotation that they have in-house to fill Mosley’s shoes. He has also said that he has experience wearing the “green dot” as the playcaller of the defense. Onwuasor came on strong towards the end of last season, picking up 3.5 sacks and two forced fumbles over the last four games.

"I always feel more confident in myself every year." Patrick Onwuasor pic.twitter.com/L0TmitLBrB

Young was strong early in his rookie season$ but seemed to run out of steam later in the campaign. He finished with 2.5 sacks, 51 combined tackles, a forced fumble and a fumble recovery but no sacks and only eight tackles from week 11 on.

Again, it cannot be ruled out that an inside linebacker could be signed to provide a bit more veteran leadership. But as is, the Ravens appear confident that the inside linebacker position is strong enough to keep Baltimore as a top five-level defense in the 2019 season.

The Ravens receiver room is suddenly crowded and two recent draft picks could find themselves on the outside looking in when the 2019 season gets underway.

In taking two receivers in the first three selections and in adding veteran presence Seth Roberts in free agency, the Ravens have put 2018 fourth-rounder Jaleel Scott and 2018 fifth rounder Jordan Lasley on notice after their rookie campaigns saw neither player catch a pass let alone play in a game.

Jaleel Scott’s roster spot may be in jeopardy after Ravens splurged at WR in the off-season. Image Credit: Baltimore Sun

Willie Snead and Chris Moore are likely locks for the roster. I can’t imagine the need to add Roberts in free agency if they weren’t intending to keep him. Since 2011, the Ravens have not had a player drafted in the first three rounds of the NFL draft fail to make the roster. Given that Brown and Boykin are proverbial locks, one of the second year receivers is not going to make this team.

Pass rusher was another area of need and DeCosta addressed it in selecting Ferguson out of Louisiana Tech. Ferguson broke Terrell Suggs collegiate sack record, picking up 45 in his four seasons with the Bulldogs. At 6’5, 271 pounds, Ferguson’s speed could be an issue at the next level. You have to imagine the Ravens see him playing a big part of their 2019 pass rushing plans. 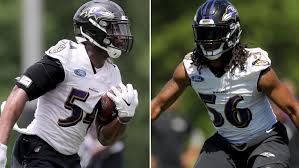 Tyus Bowser and Tim Williams will need to impress in training camp to ensure their spot on the 53 man roster. Image Credit: Baltimore Ravens

Where does that leave 2017 Draft picks Tyus Bowser and Tim Williams? The duo was selected in back-to-back rounds in the 2017 draft with Bowser going in the second and Williams in the third. Both have been busts to this point, tallying 5.5 combined sacks over their tenures in Baltimore. Both players struggled to get on the field last season.

The Ravens also had veteran free agent defensive end Ezekiel “Ziggy” Ansah in for a visit this past week. If Ansah is added to the pass rushing fray that includes Matt Judon and the aforementioned Ferguson, it would be difficult to envision key roles for Bowser and Williams in the 2019 season. Perhaps a trade like the one executed for Kamalei Correa is on the horizon for one of these two.

The Ravens regular season opener is 133 days away. Things can certainly change between now and then. Speed has been added. Belief has been reinforced in the offensive line and inside linebacker positions. Question marks have been created at receiver and pass rusher.

The 2019 roster is beginning to take shape and their could be some fireworks come cut days.